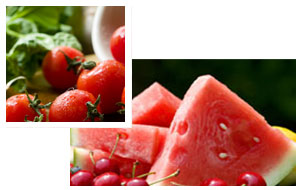 Guava, pink grapefruit, red bell peppers, red cabbage, tomatoes and watermelon each is a food high in lycopene, an antioxidant dynamo and carotenoid pigment and phytochemical. When absorbed from the stomach, lycopene is transported in the blood by lipoproteins where it accumulates in the adrenal glands, liver, and testes. Lycopene is generally found in cell membranes where it has a role in the fluidity, strength and thickness of the membranes. Within this role, lycopene helps prevent oxidative damage to the membrane lipids. This is important because cell membranes both allow nutrients in and keep toxins from entering.
Lycopene is also known for aiding in the prevention of heart disease by inhibiting free radical damage to LDL cholesterol. And scientists have conducted research that indicates that lycopene may help prevent cancers (breast, cervical, lung, ovarian, pancreatic, prostate, skin and stomach) and may help prevent age-related macular degeneration.
In food, the richest source of lycopene can be found in processed tomato products, such as ketchup, tomato juice, and tomato sauce. Processed tomatoes are higher in lycopene because cooking tomatoes breaks down cell walls, releasing and concentrating carotenoids. When it comes to fresh tomatoes, vine-ripened tomatoes offer more lycopene than tomatoes ripened off the vine.

The end of the year is a festive time, with plenty of festive food. But come January 1, there is widespread resolve to live healthier lives, and make healthier choices about what, and how much we are eating. There is no need to sacrifice enjoyment of your food simply because you are shifting to a healthier menu. Work with winter's refreshing variety of fresh produce and add some new spices for flavor sensations that are sure to keep things interesting.